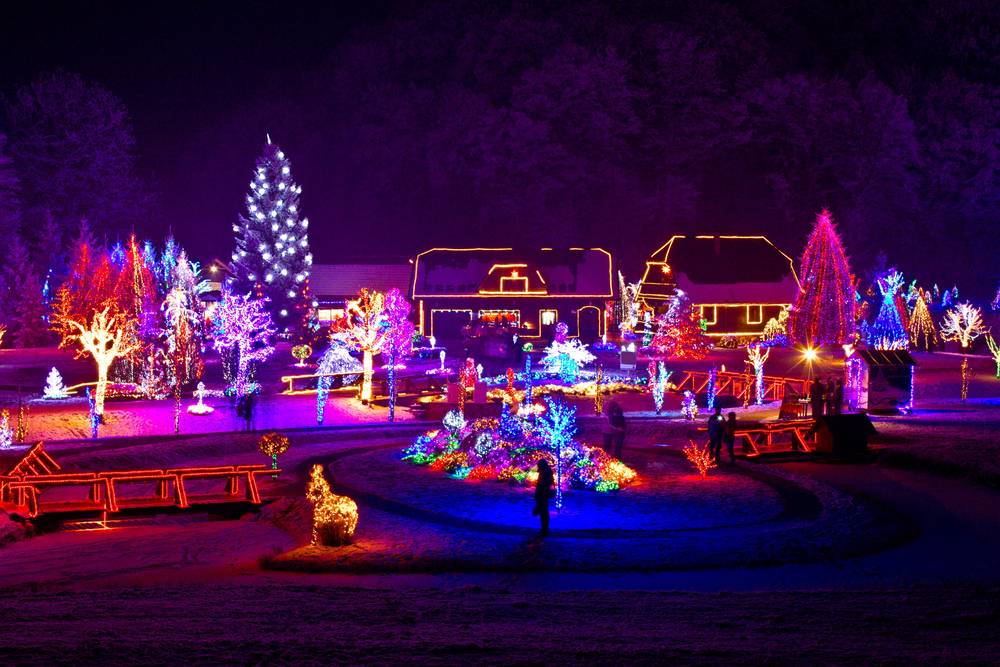 The Most Extravagant Christmas Light Displays In The World

As Christmas fast approaches, people from around the world stage extravagant, spectacular Christmas light displays that light up not only their homes, but neighbourhoods and even whole city blocks!

We thought it would be neat to share a few of the worlds best and most extravagant and dazzling Christmas light displays to get you in the holiday spirit and bring a twinkle to your eye this season.

For more than 30 years, the Garabedian family has decorated their house on Pelham Parkway North with lights and hundreds of animated figurines, many of which rotate to the sounds of holiday music. In addition to the Virgin Mary, St. Theresa and the Savior, the house features more secular "saints" like Nicole Kidman, Audrey Hepburn and Elizabeth Taylor.

The Dalisay family has wrapped their home in Christmas lights every year since 1996. The stunning and intricate lighting that surrounds the house is nothing short of bedazzling!

Since 1989, every resident on the 700 block of Baltimore's 34th street has put up Christmas lights. The tradition is locally known as "The Miracle on 34th Street.”

The tradition of elaborate holiday light displays spread from the U.S. to Germany in the 1990s. In many German cities, the Lichterkeen (light-string) enthusiasts offer hot-mulled wine and hot chocolate along with the show.

Bernard and Denise Lumsden raised money for charity by transforming their home into a huge light display every year for two decades until last year, when their electric bill doubled and they were forced to pull the plug on the annual ritual.

Homeowner Alex Goodwind places 115,000 bulbs on his home every year at holiday time to raise money for a local hospice. Last year, donations from visitors totaled £3,000.

Traffic and crime around Vic Moszcynznski's house increased so dramatically during the holiday season that his neighbors once offered him money to not put up the display. He uses the attraction to raise money for a local charity for bereaved children.

Bernhard and Michaela Nermerich have adorned their home with lights and mechanical Santas since 2002. Many spectators visit and marvel at the moving decorations which perfectly captures the holiday spirit.

Christmas is a magical time in Gothenburg. The darkest time of the day is when our beautiful city shines its brightest. The three kilometre lane of light forms a dazzling thoroughfare from the Lilla Bommen harbour area to Liseberg Amusement Park. Beautifully lit façades, statues, trees and bridges create a wonderful festive atmosphere.

The Christmas Lights Across Canada ceremony takes place on Parliament Hill. This exquisite lighting festival was created to showcase Canada’s Capital Region and highlight landmarks and sites along Confederation Blvd, and of course to kick off the holiday season. There is an official lighting route where you and your family can witness thousands of sparkling twinkling lights. The cool thing about this event, and why it’s called Lights Across Canada, is because each province and territory decorates its capital city to celebrate the holidays with a lighting festival that in turn links all Canadians together in unity.

The Festival of Lights at VanDusen Botanical Gardens in Vancouver is described as a magical winter wonderland with over one million lights that decorate the beautiful winter garden. You can walk through interactive themed areas; see a dancing light show on a lake, a gnome performance plus more.

The City of Sydney has unveiled some bright lights starting with St Mary's Cathedral. Feast your eyes on a Fantasia-style animation of the Nutcracker that has been projected onto the cathedral. Choirs perform each night until Christmas Day.

A traditional seasonal event in Medellín, Colombia, where the city hangs millions of Christmas lights and holds light shows and other cultural events. Since the 1990s, the main locations of the lights have been on and around the Medellín River and La Playa Avenue, although the event has expanded to include over one hundred other locations around the city.

This event has proved to be such a hit with Christmas light-up junkies (many rank it as the best in a competitive field). The show features approximately 250,000 LEDs and will happen every 20 minutes with extra late shows closer to Christmas.

A dear Christmas tradition amongst Copenhageners as well as visitors to the city. The lights, the stalls, and the Christmas music permeating the park together creates the unique Tivoli Christmas atmosphere. The three separate light shows last for about five minutes each, and can be experienced multiple times over the course of an evening.

Callaway Gardens' Fantasy In Lights, in Pine Mountain, Georgia, is not only the South’s most spectacular holiday light and sound show, it is one of the world's "Top 10 Places to See Holiday Lights," as named by National Geographic Traveler.

The Christmas lights are of course one of the attractions of the season, most of the buildings on the harbour front are brightly decorated. Hong Kong WinterFest is the series of events sponsored by the Hong Kong Tourism Board which kick-off in early December and run up until the New Year's Countdown on January 1st.