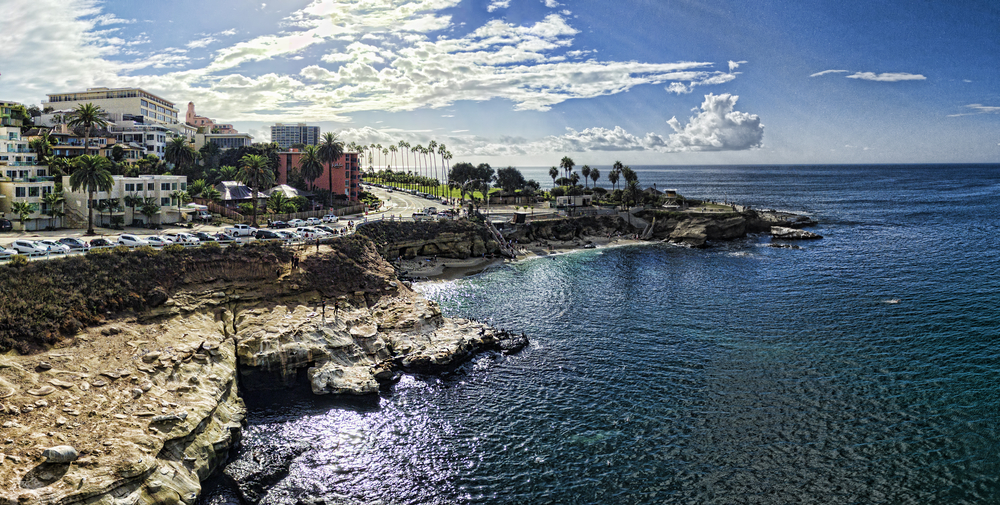 Surrounded by spectacular coastline, bluffs, and upscale village atmosphere, this oceanfront community in San Diego offers the perfect blend of nostalgia and modernism–sure to capture the attention of everyone who visits.


There has been great debate around where the name “La Jolla” originated. Some say it’s the Spanish word derived from the original Local Native American name Kumeyaay, which means “land of holes” which some believe refers to the caves visible from La Jolla Shores. Others speculate the name originates from the Spanish word la joya, which means “the jewell”, giving way to the nickname “Jewel City”.

La Jolla’s early history was mapped during the Mexican period of San Diego’s history as pueblo land (communities of Native Americans).
It was in 1870 that several of the pueblo lots were subdivided into an area that became known as La Jolla Park.
In the 1890s, the San Diego, Pacific Beach, and La Jolla Railway was built, connecting La Jolla to the rest of San Diego, quickly making it known as a resort area.
By the 1900s there was a boom, and over 100 buildings and 350 residential areas were built. This cascaded into what we now know as a city that occupies 7 miles of curving coastline along the Pacific Ocean.
As of 2010 the population of La Jolla was estimated at around 47,000.

La Jolla is like the Beverly Hills of San Diego. It’s a great place to live if you have the resources to invest.
This neighborhood ranks better than 95% of areas in San Diego for its livability score, offering plenty of attractions, a strong sense of community, nightlife, dining and plenty of shopping options.
All of which comes at a cost. La Jolla real estate is on the pricey side, but it really doesn't get better than this when you're looking at investing in one of the greatest cities to live in the world.

Here are the current housing trends for La Jolla:

The real estate market in La Jolla maintains a healthy balance of buyers vs. sellers.
The median home value listing price in La Jolla is currently estimated at $2 million as of 2019. The median home sell price is $1.7 million as per Realtor.com as opposed to $1,631,800 as of 2018 (per Zillow.com)
This annual increase lets us know that home values are going up, which is worth considering if you're thinking about buying or selling a home in the area.
You can browse the current inventory of homes for sale in La Jolla here:  steelesandiegohomes.com/homes-for-sale

From the crashing waves to the award-winning culinary creations, La Jolla sparkles with sights and attractions in a picturesque village with a little something for everyone.
This neighborhood offers the perfect mix of hustle and bustle without losing its casual, relaxed luxury for locals and visitors alike.
From boutique hotels to fun-filled spectacular beach days, La Jolla is anchored by unique and locally oriented businesses, restaurants, retailers and features art and culture on every corner.
The parks and beaches in La Jolla are nothing short of amazing, probably the best in San Diego. There are many great spots to explore.
La Jolla is also home to a variety of historic buildings, with many structures on the National Register of Historic Places. Over 50 of which are listed as San Diego Historical Landmarks, according to LaJollaHistory.org.
Education in La Jolla is ranked highly not just by parents and teacher but also test scores. La Jolla has scored 9 out of 10 on greatschools.com for its academia.
Public Elementary Schools Include: Bird Rock, La Jolla & Torrey Pines.
Public Middle & High Schools Include: Muirlands Middle School and La Jolla High School.
Private & Niche Schools Include: The Bishop’s School, La Jolla Country Day, The Children’s School, Stella Maris Academy, The Evans School, The Gillispie School, San Diego French American School, Montessori School of La Jolla, Southern California Yeshiva High School, Beth Montessori At Bethel, All Hallows Academy and more.

La Jolla is located 15 miles north of downtown San Diego and approximately two hours driving south from Los Angeles.
From the North Take I-5 south and exit at La Jolla Village Drive. Head west on La Jolla Village and turn left onto Torrey Pines Road, which leads to La Jolla Shores Drive and Prospect Street.
From the South and East Take I-5 north to La Jolla Parkway. Continue into La Jolla and turn right onto Prospect Street.
From San Diego Airport Head east on North Harbor Drive to Laurel Street and turn left. Follow signs to I-5 and go north approximately 7 miles to La Jolla Parkway. Continue into La Jolla and turn right onto Prospect Street.
Public Transportation La Jolla is serviced by bus routes 30, 31, and 34/34A. For timetables, fares and more information on San Diego’s bus and transit system, visit sdcommute.com
La Jolla is a popular place to be, particularly in the summertime. Experienced visitors and residents know a little extra planning can go a long way toward finding a good parking space.
Parking Is Free on the Streets of La Jolla
There are no parking meters. However, watch signs for two-hour parking limits. Don’t gamble. Parking enforcement actively patrols the streets even in the winter months and tickets are not cheap!
Once you do get to the Village, it’s best to leave your car and stroll. Everything you’ll need is within walking distance. Carpool or take public transportation whenever you can. Even better, ride a bike!
Heading to the Beach?
Consider La Jolla Shores, which has a large parking lot and free parking on adjacent residential streets. Even so, get there early!

TOP THINGS TO SEE & DO NEARBY

You’ll love visiting the Museum of Contemporary Art, with rotating exhibitions and a relaxing outdoor café where you can fuel up during your trip.
If performing arts is more your thing, be sure to catch a show at La Jolla Playhouse.
Rent kayaks and book a tour through the La Jolla Cove, where you may catch a glimpse of aquatic life below the sea. You may even see a few seals, bathing in the sun on their favorite rocks. If you aren’t a fan of kayaking, you can still see seals from the sidewalk above.
Walk to a variety of delicious restaurants, including George’s at the Cove, Puesto Mexican Street Food and Crab Catcher. If you don’t want a sit-down mean, you can meander through the La Jolla village and find a quick taco or Mediterranean sandwich.
On the off-chance that it rains on the weekend, leave the beach and head inside to visit the Birch Aquarium at Scripps. As part of the world-renowned Scripps Institution of Oceanography at University of California San Diego, it’s one of the most unique aquariums you’ll ever visit.
For those of you who like to stay active all week long, there’s plenty to keep you moving, morning, afternoon and night every day of the week. Fitness enthusiasts will love starting their day at one of the many small, fitness boutiques in the area, and yogis have their choice of studios. Don't miss a chance to visit Trilogy Sanctuary, which is a rooftop vegan restaurant attached to an aerial yoga studio, complete with ocean views.
For an afternoon pick-me-up, you can head out for a hike, a walk on the beach, or a hunt for the secret swings. If you follow the directions from Hidden San Diego, you’ll get a relaxing tour of the Scripps area of La Jolla, where the Birch Aquarium is located. Despite some of the swings being removed by the city of San Diego, the views are worth the trek—especially at sunset.
At the end of the day, you don’t have to trek through the hills of La Jolla to catch a photo-worthy sunset. Instead, drive up to Mount Soledad, one of the best places to watch the sunset. It’s just a short drive from most neighborhoods of La Jolla. Better yet, leave your car at home and take a stroll along Wind N’ Sea beach, also spelled Windansea, one of the prettiest beaches in San Diego.
Whether you’re hiking through the hills or checking out fish in the aquarium, La Jolla offers a wide variety of opportunities for every resident. There’s no doubt that you’ll enjoy the best of what San Diego has to offer in this gorgeous, seaside community.

La Jolla is the ideal coastal location for anyone looking to invest in a higher-end market. Endless activities and lavish seaside surroundings make everyday feel like a special getaway. La Jolla was rated with one of the highest livability scores in San Diego (for its amenities, low crime rates, and excellent educational and employment opportunities) and the upwards trend of growing value in real estate shows no signs of things slowing down. All of this makes La Jolla a prime market to buy, sell or rent a home.